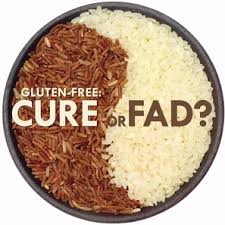 ” We have mutant seeds, grown in synthetic soil, bathed in chemicals, then deconstructed, pulverized

to fine dust, bleached and chemically treated to create a nutritionally void industrial filler that no other creature on the planet will eat. And we wonder why it might be making us sick?” –  www.grainstorm.com

I’ve read a few articles that suggested that Gluten Intolerance was just a fad. I wonder if they are suggesting that we’re faking it or that we’ll be able to eat wheat again, once we’ve decided that it was just a silly fad. Maybe I just don’t know what the word fad really means. Let’s go over to dictionary.com and see how they define the word fad.

People are actually getting sick, so I can’t see how it could just be a short lived craze. We’re not just miraculously going to be able to eat wheat again, especially the over processed wheat that we’ve all been eating.

Don’t you think the fact that so many of us are getting sick, makes it worth looking into or that it’s physical proof that our food system is tainted. I mean take a look around. We all know that our modern food system is adding poisonous pesticides and preservatives to our food. So why is it so hard to believe that this food could be making some of us sick. Do you think it’s just a coincidence?  We all know someone who is Gluten Intolerant or Celiac. So why do people say things like “oh, it’s just a fad” or “She’s probably just covering up an eating disorder.”

Some people may be going gluten free just to loose weight, but at least they are trying something different. Being over weight isn’t healthy and maybe gluten is partly to blame for that. We should encourage the people around us to make positive changes in their lives, rather than trash talking their choices behind their backs. I did loose weight by cutting out the gluten but I changed what I eat completely. It’s not just a diet that I’m on for a while to try to slim down. My goal was to feel better and weight loss was just a side effect.

The wheat we eat today isn’t the same wheat that we ate years ago.

For more on this subject check out this awesome article on  www.grainstorm.com. It makes some great points about modern wheat.

The article is titled What’s wrong with modern wheat , and goes on to say…

“How we turned an ancient food staple into toxic junk food…”

” We have mutant seeds, grown in synthetic soil, bathed in chemicals, then deconstructed, pulverized to fine dust, bleached and chemically treated to create a nutritionally void industrial filler that no other creature on the planet will eat. And we wonder why it might be making us sick?” Click here to read more of this article.